Judge Armstrong found that Mr. Fredericks’s former employer, pharmaceutical giant Amgen, failed to accommodate his disability and wrongfully terminated his employment after Fredericks sustained a closed-head injury in a taxi accident while on a business trip to Japan.

Fredericks had been a Director of Quality Assurance for Amgen at the time of his injury.  After the accident, he struggled to recover and return to work full time.  His injuries affected both his ability to perform his previous high-level role and his ability to communicate successfully with his managers about his recovery and performance.  Despite Amgen’s knowledge of his injuries, his treatment for them, and the adverse impact they were having on his performance and emotional state, Amgen fired Fredericks, claiming he was insubordinate.

Because Mr. Fredericks had signed an arbitration agreement while he was employed with Amgen, the case proceeded before an arbitrator rather than in court.

We successfully argued that Amgen had discriminated against Mr. Fredericks because of his disabilities, an action that was particularly egregious because those disabilities had occurred as the result of a workplace injury.  Adding insult to injury, Amgen tried to defend the case by arguing that our client was exaggerating his symptoms.  Over the course of a six-day hearing, we proved otherwise through the testimony of medical providers, medical experts, economists, and Amgen employees from as far away as Ireland and the Netherlands.

Following the hearing, Judge Armstrong ruled that Amgen had failed to accommodate Mr. Fredericks’s disability and wrongfully terminated his employment.  After very complex calculations of lost wages and stock awards, the judge awarded a total of over $2.2 million to Mr. Fredericks, including $750,000 for emotional distress. 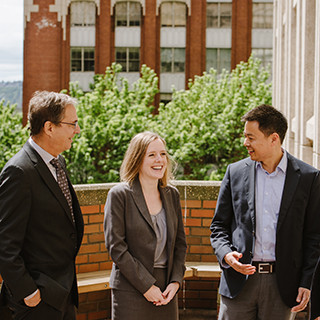